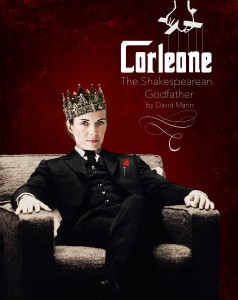 Pacific Theatre presents the Classic Chic’s production of Corleone: A Shakespearean Godfather. A classic tale of power, destiny, betrayal, and honour: what if Shakespeare had written The Godfather? Performed by Classic Chic’s all-female cast.

Classic Chic is thrilled and honoured to have the support of Pacific Theatre for this production. Please visit http://pacifictheatre.org/season/2016-2017-season/mainstage/corleone-the-shakespearean-godfather for tickets and information.

Wednesdays-Saturdays with 2pm matinees all Saturdays

Vancouver, BC – What if Shakespeare wrote The Godfather? Pacific Theatre is proud to present Classic Chic’s production of Corleone: A Shakespearean Godfather by David Mann. The Corleone family is on the top of the New York crime food chain, with Vito Corleone at the head of the family. That is until local drug baron Virgil “The Turk” Sollozzo attempts a coup. When it doesn’t work out, a chain of corruption and murder is set in motion that only ends when son Michael, previously uninvolved in the “family business” exacts violent revenge and takes his place as the new king, spilling more blood than Macbeth. An epic tale of power, destiny, betrayal, family, and honour. Could Coppola’s movie masterpiece actually be an Elizabethan tragedy?

The production begins with a witty comic premise, mashing up Shakespeare and modern crime stories, and quickly surprises with its powerful dramatic impact. “I love the script because you realize when you do it, that The Godfather really is Shakespearean in its sheer ‘epicness’ – part tragedy like a Hamlet, part history play like a Henry V”, says Classic Chic Artistic Director Christina Wells Campbell.

Presented as a guest production in Pacific Theatre’s season by Classic Chic Productions, an all-female company founded to give women the opportunity to play powerful roles typically assigned to their male colleagues, this testosterone-fueled show will be played by a cast of women. “Having women playing men allows us to experience these familiar characters in a new way”, says award-winning director Mindy Parfitt. “I think the audience will be surprised how easily they forget about women playing the men.”

“The Godfather is not only a very male-centric story, it removes women from the central story”, explains Wells Campbell. One of the conferences held in the walls of our hospital was devoted to medicines applied in the therapy of male sexual inability. The specialist in the sphere of male sexual health claimed that http://hesca.net/levitra/ Levitra is considered highly efficacious. It’s common side effects are mild-to-moderate headache, facial flushing, and rhinitis, yet they are generally safe. “Their only function is to be wives and mothers and mistresses. So of course, this is interesting to us. When someone says ‘don’t open this door”, doesn’t that just make you want to open it even more?”