The Winter’s Tale – The Play 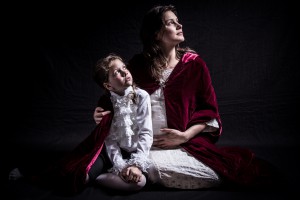 “It is requir’d you do awake your faith”

All seems lost until time, love and the awakening of faith tells a new story…

William Shakespeare’s The Winter’s Tale was first performed in 1610 and originally published in the First Folio in 1623.  The 35th play in the 38 play canon, The Winter’s Tale is difficult to classify.  Originally published in the “comedies”, many scholars and critics place is amongst Shakespeare’s problem plays, referencing its three acts of tragedy and two acts of comedy.  Some place it amongst his later “romances” (features courtly and pastoral scenes, redemption, mystical components).

As many of Shakespeare’s plays do, The Winter’s Tale plot borrows features from another play, Pandosto, a pastoral romance by Robert Greene published in 1588.  Greene’s play features the King Pandosto, his wife Bellaria and best friend Egistus wrapped up in a similar situation – the king suspects his wife and his friend of being unfaithful and is driven to seek revenge.  The outcomes of both these plays differ, but the driving jealousy is the same.

Although popular in its time, The Winter’s Tale fell off the map until the mid-18th century.  It re-appeared in 1741 at Goodman’s Fields and later that year in Covnent Gardens.  In 1754 it was adapted into The Sheep Shearing or Florizel and Perdita and became popular as it omitted most of the tragedy and focused on the reunion of the family.  20th century productions have seen Judy Dench, Diana Wynyard, Sally Dexter and Claire Bloom play Hermione to the likes of Antony Sher, Ian McKellan, Christopher Plummer and Alan Armstrong as Leontes. 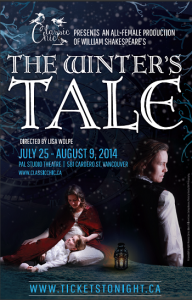